I don’t know a lot about parachutes, but I do know that if you need one, you want it to work perfectly.

Having never jumped out of a plane, and having no desire to ever do so, you would think that “parachutes” would be the least of my concerns.

And you would be right.

Until recently, when a friend told me a story she had heard about a man named Charles Plumb.

Plumb was a US Navy jet pilot in Vietnam. During a flight, his plane was struck with a surface-to-air missile. He ejected and parachuted into enemy hands. He spent six years there. And in the years following his release, he has used that experience to help many others find their way through dark places.

One day Plumb was seated in a restaurant when a man approached him and asked if he had flown jet fighters from the aircraft carrier Kitty Hawk. When he replied in the affirmative, the man said, “I packed your parachute.”

That parachute had saved his life. (Image via Pixabay) 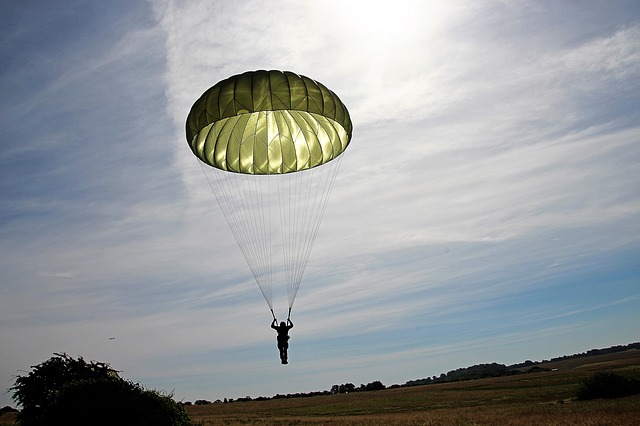 Have you ever thought about the people in YOUR life who have packed your parachute, so that when you took a giant leap of faith, it opened perfectly, bringing you back to earth safely?

My mom and dad certainly packed my parachute.

My husband, when he led me to the Lord, packed my parachute. He put in all the essentials I would need for the rest of my life.

There have been teachers and pastors and friends who have made sure that I have everything I need when I make my next “jump” into the unknown.

When I take a trip, I usually have a backpack that I cram full with everything I could possibly need. Food, of course, in case they don’t have any on the airplane. (I might starve!) Sweaters, in case it’s colder than I like. My iPAD, my phone, my favorite devotional or whatever book I’m studying at the moment.

I overpack every time.

When we used to pack for a family trip, my poor husband would exhaust himself trying to pack all the things I thought we MIGHT need.

And I used to use the same logic when packing my parachute for a leap of faith.

One day I realized that all I really needed to pack up were my promises, and my faith in them. Then I could jump, making sure that I had a TIGHT hold on Jesus.

At any rate, you have the opportunity to make sure your chute is packed and ready today.

You can take the time to be sure that everything you need for a successful leap of faith is in perfect working order: all those promises, all that Godly wisdom, and all that faith, stuffing your chute full. Successful jumps require a successful landing don’t they?

As I said earlier, I can’t imagine jumping out of an airplane, but as Christians we take giant leaps into the unknown every day.

Is your chute packed and ready?