Oh, the Things You Can Hear!

If you read my last blog post (here), you’ll recall I mentioned that during a recent book signing event at Kroger, I put into practice two things God asked (through the still small voice of the Holy Spirit) that I do.

One of the things was realizing that what I focused on affected the atmosphere around me.

When the Holy Spirit told me to think about the worship songs that had been going through my head, I did. Then happily sitting there, I suddenly realized people were now smiling at me. I am not kidding.

Everyone that passed by was now smiling at me . . . and at each other. What a difference!

Before, there was none of that. It was not fun being there at all. Everyone seemed to be in a bad mood and I was obligated to stay because of the schedule in the Author Kroger Program booking.

Now I can’t wait to be sent back to that store!

The second thing I was asked by the Holy Spirit to do was to listen. Just listen.

Well, that’s easy, I thought. I can do that.

The first person who came up after that was a lady from Germany. Germany!!

When my husband Bob was in the military, we were stationed at Ramstein Air Force Base in Germany for three years. That was from 1981-1984, but I still remember a lot of conversational German.

I practiced my German on this lady, and suddenly I had a new friend. She asked about my book (Restore, Restore, Restore and More!), and said she knew all about how God restores.

She had been told she had maybe sixteen days to live . . . and that was six years ago! What a testimony. I told her God indeed has a plan for her life.

She told me that wasn’t the first time she had escaped death and trouble.

Her stories went back to age four when she was a little girl in Germany and was hit by a car. It threw her body seventeen feet and she landed by a gate. She tried to pull herself up but couldn’t.

She had torn her clothes and was so afraid she was in trouble. The next time she woke up, she was in the hospital and her mother was there. She told her she was sorry, and her very strict mother assured her that she was not in trouble.

Her next story was in Germany at the age of twelve.

Back when she and I were growing up, things were different. Parents didn’t worry about children being hurt or taken by someone. I used to be able to ride the bus downtown to a movie with other children.

The movie was usually a western like The Lone Ranger. We had a nickel for the bus, and a quarter which we used to purchase the movie ticket, a drink, and some popcorn. (Things have REALLY changed, haven’t they!)

This lady and her friend, Monica, who was also twelve years old, had ridden the train to the Schwimmbad. You’ve probably already figured out that’s the German word for swimming pool.

We saw many Schwimmbads during our stay in Germany. They are very large, nice public pools enjoyed by families with children of all ages.

In town that day was an Arab king. He had rented the entire downstairs of the best hotel there, and had let his boys go swimming. (Image via Pixabay) 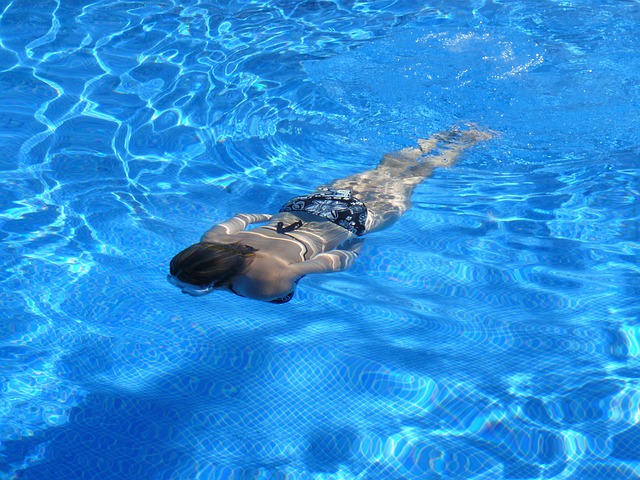 These two girls had no knowledge of that, but they saw the boys in the shallow end of the pool with a big ball. Realizing those boys couldn’t swim, the girls swam over under water, hit the ball into the deep end, and swam back under the rope.

The boys could do nothing about getting their ball back, but eventually it ended up being a fun afternoon hitting the ball back and forth.

The boys told the girls to come to the hotel so they could get a drink. They got a drink and had something to eat. Then the king walked in.

The boys had told them their dad was a king, but the girls didn’t believe them. They were introduced to the king, and he told the girls that his men would take them home.

They refused, saying their mothers wanted them to take the train and never ride with anyone.

The girls took the train home, and this girl had no plans to tell her mother about their adventure that day.

The next day after school, she came home to find flowers all over the house. The girls had been followed and the flowers were for her mother . . . to get her to sell her daughter to them for the king’s sons.

That German mother told them that no way would Monica or her daughter ever be sold, and they were to get out and they could take their flowers with them.

I told my new friend several times that I had better get back to work. But God would whisper, “Just listen, it will be all right.” She talked for almost two hours while shoppers (and the manager) passed by us.

The next shopper who stopped by also needed a listener, because she was so happy she just had to tell someone her news.

She had just been called and given the results of some medical tests and she didn’t have the esophagus disease they thought she had. They found a healthy esophagus instead.

She was in awe. I told her I had read this was an “Awe gust” month.

She asked about my book, and grabbed it.  “I have to buy this, because I have a prodigal daughter, and we don’t even talk now.” She told me about her daughter and the road her daughter had chosen to take.

I was so glad to have this book of hope to offer her. I told her I would join her in praying for her daughter.

The shopper after that wanted to know about the books, and she told me about her church and how God was using her gift of art in the church.

I was interested in hearing all about that church because it sounds like a dynamic one. Oh, the paintings she had done while a sermon was being given! She had pictures of some on her phone. I wish you could see the one she did of Psalm 91. What a talented young lady!

The next day, she came back with a friend, also a powerful Christian, and they talked about what the plans are for that church. They are having a conference in October that they invited me to attend.

They both wanted to buy books, so I signed them and they checked them out with their groceries. They are both artists with their church, and both have the gift of prophecy.

One gave me a prophetic word from God that was so anointed it nearly made my knees buckle. Yes, I was blessed.

It went on and on like that. Just listening.

These people gave me a gift and I gave them a gift. That is what happens when you listen. It lets that person know they are the most important person in the room right then, and what they have to say is worth all your attention.

Give a gift to yourself by being a listener. People have stories. You’ll be blessed. Yes, indeed you will be blessed.