In Arthurian legend, Arthur of Camelot is the rightful heir to the throne of England. However, he is orphaned as a baby after his wicked uncle murders Arthur’s parents, the true king and queen. Arthur lives without honor or recognition, oblivious to his destiny, until one day he (along with every other able-bodied man in the kingdom) is summoned by the wicked imposter king to attempt the extraction of a sword that has mysteriously appeared in a large stone outcropping. Arthur pulls the sword from the stone, identifying himself as the “born” king and enraging his uncle, who then recognizes Arthur as his nephew. The sword, called “Excalibur,” remains in Arthur’s possession during his uncle’s murderous pursuit, until Arthur hurls it into a lake during a moment of self-doubt regarding his destiny. The Lady of the Lake catches Excalibur before it sinks and returns it to King Arthur.

When my new book, His Child: Asking Jesus for Your True Identity, was in the final stages of editing, my husband volunteered to design the cover. Before he could start working, I had to find the right image to grace the front cover. I spent hours perusing stock photos online using search terms like “royalty,” “crown,” and “Christian armor.” After looking at hundreds of photos and on the brink of giving up, I discovered the ethereal image of Excalibur with its tip submerged in a pond, and the faint suggestion of a castle in the background. I instantly knew the image was perfect in composition, but I didn’t yet realize how perfect in terms of symbolism. 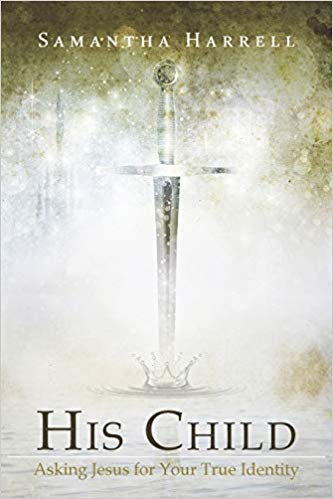 Over the next several days, as the cover began coming together, I realized why God led me to choose the legendary sword for my book cover. We each have our own Excalibur, which is the calling God has placed in our hearts. It can become entombed in a heart of stone after a series of defeats, betrayals, and disappointments. If not pursued, a dream eventually dwindles to a distant memory, seemingly unattainable under satan’s cloud of deception. Many of us live deceived for years, believing otherwise, having been robbed of the truth and much else. We remain spiritually impoverished until God opens our eyes to the truth, restoring our inheritance and clarity. Like Arthur, we are instantly transformed from pauper to palace the moment Jesus reveals our true identities as His Sons and Daughters. As His children, we are royalty, the true heirs to His kingdom.

Prior to writing a book, I struggled for years to find the time and energy to pursue my calling as an author. It was impossible between taking classes, working, and growing a family. Once I was able to accept God’s invitation to write, I became determined to take the necessary steps forward each day toward a publication. I recently removed the author’s sword from the stone with the publication of my first book, His Child. From here, I suspect there will be days when I doubt my ability, feel like giving up and tossing my author-ian identity. On those days, I will look to my book cover at the sword that wouldn’t sink as a reminder of God’s open invitation to pick it back up.

I pray His Child will be a reminder for those with an abandoned dream or distorted identity to ask Jesus for healing, bringing forth all that has been relinquished or forgotten. Ask Him for a new heart and a new spirit, for a heart of flesh instead of stone (Ezekiel 36:26). Ask Him for your true identity, step forward, and reclaim your inheritance!

Samantha is the author of His Child: Asking Jesus for Your True Identity.